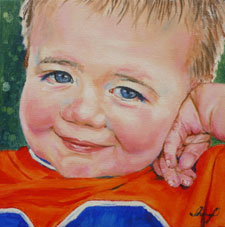 Anyone who knows me at all knows that in art, I’m not much for rules. It’s art – not brain surgery! If it works, I say, do it. There are only a few exceptions, and those have to do with technical things. Things that would greatly reduce the life time of the final painting. In oils, there are some things that you can do incorrectly that would cause your oil paint to crackle when it dries. Sometime, even crackle and fall right off the canvas in chunks! This can actually happen in weeks, as well as months or years. That I do try to avoid. So what are the rules? Simply put – 1. fat over lean and 2. thick over thin. The word ‘fat’ refers to the amount of oil in that particular pigment. Each colour has it’s own ratio of oil to pigment. The most oily are white and yellow ochre. There are differences in some of the other pigments too, but I have not seen them cause crackling – feel free to comment if you have had crackling involving an underpainting of colours other than those two – I’d like to know. The rules only kick in when you have a dry layer of paint that you are wanting to put another layer of paint on top of. So, a dry layer of white (or a mix containing lots of white) or yellow ochre risks having additional layers crackle as they dry. Stirring oil mediums into subsequent layers of paint is one solution. The problem with that is that mediums tend to leave that surface in that area much glossier, which can be unpleasing. As for rule number 2, when you think about it, thick over thin is really the same thing. A dry thin layer of oil paint has less oil content than a thicker layer of paint put on top. However, if all of the paint is wet together at the same time, the oil has a way of evening itself out as it dries, and you can ignore both rules. /