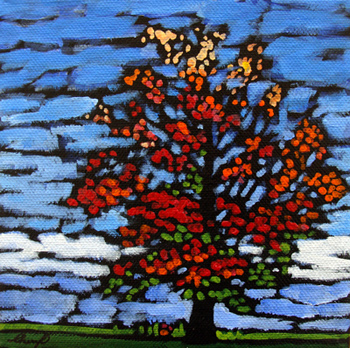 Sometimes we painters get so absorbed in our painting that we forget that it can look very different from a distance. Stand back – often! Ten or fifteen feet between you and your painting, and a critical eye, can save you from many compositional and colour disasters.
Read More 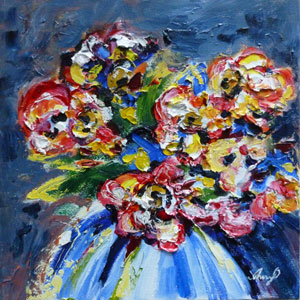 With lots of registrations coming in already for classes that start in October, I have been pondering the happy atmosphere of classes again. I’m convinced that it’s partly the creative spirit of students interested in art that fosters such an atmosphere,  but there are other things that help too. One is understanding learning curve. We would all like to have the kind of learning curve that looks like a straight line sloping upward. Fact is, I don’t know anyone who learns that way. With most of us it’s 4 steps forward and 2 steps back. For myself, I do a lot of flat lining. Those are times when I feel like nothing is happening. But I know from experience that if I persevere, the line will eventually slope upward again and I will get where I am aiming – with practice. People also learn at different speeds as well. I say, if you are having fun learning, it really doesn’t matter at all how quickly or slowly you learn. Being conscious of these few aspects of learning can help make it a happier experience for you. Hope to see you in class!
Read More
I’ve never been a fan of Thomas Kincade, to me his art feels like too much sugar. But I must admit, he did a brisk business. So – good for him. I have seen some really negative articles written about his work since he passed, saying that he wasn’t a real artist. I disagree. His paintings still required real skill, and spoke meaningfully to many. For a long time I have been aware that art is a language and as such, artists can say whatever they want with it. It doesn’t mean that I want to have it all on my wall, but when it comes to Thomas Kincade, apparently a lot of people did. If you would like to read more about this controversy, the best article by far that I have read about it is by Graham Matthews – here’s the link: “Art Promotive – Thomas Kinkade Controversy“. Your comments are welcome below.
Read More 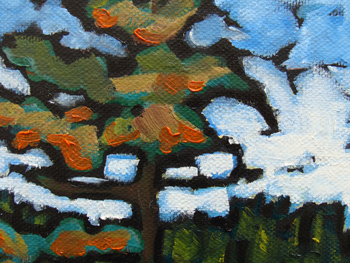 “Too many artists get seduced by sunlight and have to continually adjust for light variations. The lighting conditions in [my studio] are perfect. It never changes from day to night. I always know the colour on the canvas is what I want it to be.”  – Jack Cassinetto – How about you – studio or plein air painter? Some of both?
Read More
Watching a large bird soar on the wind, for a moment I could glimpse the invisible currents of air as it rose and dipped without any movement of its wings. And I thought, isn’t it like that with all invisible things? They are seen only in the effect they have on things nearby. We are surrounded with a substance we cannot see, the air, but we understand it primarily by the effect that it has on objects within it. When I say “a windy day”, images of tree branches or leaves moving come to mind. Even fog is  simply water droplets floating in the air – we never actually see the air itself. The same with gravity. And so are other invisible things understood by the effect that they have on those who are near. Things like love, hate, kindness, are never seen with the eye. They only become visible in the words and actions of those who are moved by them. In some ways God is like that too – invisible but seen in the actions of those who are near to God. And as far as art is concerned, when it is expressing a heart felt emotion, whether it is pure emotion or an emotional response to a subject, it is making visible that which was previously invisible. A high calling indeed.
Read More 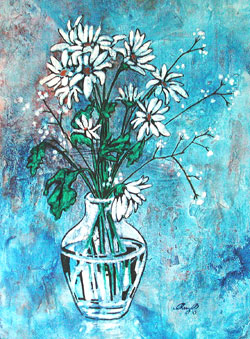 “Everything we paint is a statement about ourselves.” Mark Davis
Read More

Sometimes drawing lines on canvas to start a painting is useful, and sometimes they are a handicap. It’s one of those things where you need to experiment to see which method brings out the best in your painting. Beginners often assume that the more lines to start with the better, but that’s often not true. Too many lines can make for a tight (read: uptight) rendering rather than a free painterly expression. Granted, there are time I recommend lines. Certainly in portrait work, many artists start with a light pencil sketch on the canvas to help with accuracy. Difficult angles in architecture are helped by some lines as well. However, starting without line allows the painter to freely block in shapes and get an overall sense of composition and values more quickly. The best advice I can give is to start with as few lines as possible. And, if you like to start with a pre-coloured canvas that is medium to dark in value, white chalk is a great thing to draw the lines with.
Read More
Oooooooh – I love this! Dale Chihuly: Playing with Fire “If you know exactly what you’re doing and make it everytime, it’s not going to be interesting. Go beyond what you can do – it’s more interesting that way.” (And thank you to The Art People for posting this on Facebook.)
Read More

Some things have a way of causing a sense of awe to well up inside me – such as those amazing photos from deep space, the deep stillness by a mountain lake – and your amazing voice. “What?”, you say. Do I even know you? I actually don’t have to. Here’s the thing. Everyone has a very unique individual voice. Not necessarily the one you talk with, although those are special too – I’m thinking of the one you create with. In creative arts, painting is what I’m most acquainted with. Imagine this – a class of 14 students. Let’s say they are pretty new into art and so I’m helping them step-by-step through a painting – carefully giving colour and technique instructions. At the end of the class we set the 14 paintings against the wall – and guess what? NONE of them look the same! Each bears the stamp of the unique individual who created it! Then as students get more proficient, their individual voice gets even stronger. How amazing that we should each have our own distinctive creative voice! I think I have one of the best jobs ever, helping people discover this. What do you think? Do you know that you have an amazing voice?
Read More