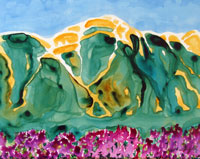 “You are the only one with a front seat in your life. You are the only one with a 360 degree view. Why on earth would you let someone else drive?” Cheryl O – This doesn’t mean that you don’t take, and even seek out, good advice. It does mean taking ownership of the decisions you make – both good and bad. And there will be both; it’s called being human. I apply this to my art too. I enjoy getting lots of comments from others, even for a work in progress. I bring paintings in progress into class so my students can not only see them at various stages but also comment on them and develop critiquing skills. I also believe in encouraging live-in critics of all ages to give their 2 cents worth. When I was a beginner painter, I was delighted to discover that my youngest son (age 8 at that time) had a great eye. “Mom, that yellow is too wimpy.” And he was right! Artists or non-artists, occasionally a different set of eyes can pick up something in a painting, good or bad, that you will wonder how you missed. But always, I am totally aware that I am the one holding the brush. And I’m not afraid at any moment to reject any advice, no matter how strongly expressed, and carry on in my own unique and very human way.
Read More

Some artists have a real system for how they place their paint on the palette. I suspect it depends on how many pigments they prefer to work with – more pigments, more organization required. Some portrait artists in particular have very complex specific arrangement of flesh tone pigments and specific mixtures of these on the palette. Other artists like to use a colour wheel format. Since I prefer to work with fewer pigments, ideally 4 or 5 maximum, I don’t really fuss with where I put them on the palette, with one exception – the colour white. If I am using a white paint, I like to put it in the center of the palette so that I can easily pull it into the other colours that are placed around it. With white oil paint, I put a long ribbon of it in the middle of the palette. Then I can pull it into darker colours from one end, and lighter colours from the other end, and not worry too much about the white getting contaminated.
Read More

“My advice to the women’s clubs of America is to raise more hell and fewer dahlias.” J.A.M. Whistler –  James Abbott McNeill Whistler (1834 – 1903) is one of my favourite portrait painters, and one of art history’s more colourful characters. His family was wealthy – in 1842 Czar Nicholas of Russia invited Major George Whistler (James’ Father), a British railroad engineer, to build a railroad from St. Petersburg to Moscow for a large annual salary. James attended the U.S. Military Academy at West Point in 1851, where he got first in drawing, but did poorly in chemistry. He was eventually expelled for constantly breaking the rules. Supported by a generous inheritance, he then went to Paris to study art. While copying masterpieces in the Louvre, he met Henri Fantin-LaTour and eventually networked with Courbet and Rosetti. You can see the influence of the Pre-Raphaelites – those romantic medieval dreamy paintings of women in long dresses – in some of Whistler’s work. Whistler’s art career had its bumps and rejections from the galleries too. Most notably, in 1877  John Ruskin wrote an insulting review of some of Whistler’s paintings in an exhibit. Whistler decided to sue Ruskin for liable in what has been called the most sensational art trial of that century. Whistler was awarded a small sum of money, and the trial ruined him financially. He was forced to sell his home. Fortunately he was at that time commissioned to do some etchings in Venice, and he spent 14 months there. He had enough of a reputation by then to make a more than comfortable living from commissioned portraits, and other painting sales and eventually settled in London England. He set up house with 2 of his models at different times, and did eventually marry in 1888. His wife was the widow of E.W. Godwin a famous English architect-designer. Here’s a link for you to see some of Whistler’s paintings. I have seen “The White Girl” at the National Gallery in Washington, and is often the case, it is breathtakingly beautiful to stand in front of, but a photo does not half capture that beauty. Paintings by J.A.M. Whistler (Find link on my website homepage, if you are reading this elsewhere.) And, I do love this quote, especially given the time period he lived in.
Read More 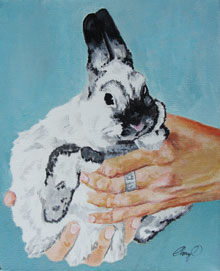 “Ideas are like rabbits. You get a couple and learn to handle them, and pretty soon you have a dozen.” John Steinbeck – To be truly creative, you need ideas. Not just a few, but lots of ideas. Ideas popping up without any constraints. Fun ideas, crazy ideas – ideas that make you shout, ‘Hey, nobody has tried THAT before!” Now, there could be a good reason that nobody has tried THAT before. Or, THAT may just be what your art form needs to give it real pizazz. Don’t be afraid to have lots of ideas and sift through them. Some will go the way of the inflatable dart board. Others may be just the ticket to your creative freedom and joy.
Read More

“What the world really needs is more love and less paperwork” Pearl Bailey – Amen to that, Pearl, Amen. Spread some of that round to your family for Family Day – I mean the love, not the paperwork. Although…just thinking… 🙂
Read More

“Paint like your hair’s on fire.” – Scott Lloyd Anderson – What can one add to a great idea like this? (Thanks @iTweetArt)
Read More
“Where Good Ideas Come From” – This video is an entertaining animation that talks about how the greatest inventions in science and technology came to be. In the second half, it makes a strong case for networking in order to bring out the best creative ideas. In any creative field, we stand on the shoulders of those who have gone before, and so I see applications from this for the visual arts as well. We can’t exactly have a chat with most of the great artists who went before us (and if you think you can, I don’t want to know about it 🙂 . However, taking the time to study their works can tremendously boost your own ability. It’s inspiring to go to galleries and stand in front of masterpieces. If that is not possible for you, libraries and the internet are wonderful resources. Discover which past great artists have paintings that really move you. And the very best way to learn from the greats? Spend time copying their paintings (for educational purposes, meaning, not for public display or sale). This allows you to absorb some of their painting expertise in a way far superior to simple observation. You need not worry that the influence will be overly strong – your own unique interpretation will eventually shine through, in the same way that your signature is your own. In this way, you create a space where ideas can “mingle and swap, and create new forms”.
Read More 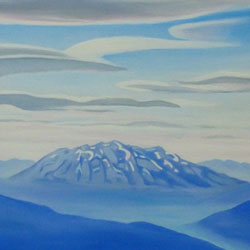 There are many common misconceptions  about painting. One is, that the more tubes or jars of colour that are put out for a painting, the more chance there is of getting the colours in that painting right. In fact, fewer pigments make for the best chance of a harmonious colour scheme. I rarely use more than 4 pigments in a painting, and frequently prefer 3 plus white. Mixed secondaries – greens, purples, oranges – have the advantage of being related to the primaries they are mixed from. More important, a green mixed from blue and yellow can be mixed to sometimes lean to the blue and other times lean to the yellow. This gives life and interest to the colour that straight green from a tube is sadly lacking. So when putting out your paints next time, remember, less is more.
Read More

“Courage doesn’t always roar. Sometimes courage is the quiet voice at the end of the day that says, ‘I will try again…'” (Thanks @NoraWhalen) –  It’s tough being a beginner. That applies to painting too, and I think especially if you have seen a lot of great art. You know what you like. You know where you want to go with painting – but the brush doesn’t seem to get it. There’s an expression: the sooner you finish your first 100 paintings, the better. That expression acknowledges that gaining skill takes practice. You wouldn’t expect to play a Bach masterpiece after one piano lesson, and in the same way, making a great painting means putting in the brush time first. Don’t be too hard on yourself, and remember, even the most amazing famous painters were beginners once too.
Read More